I was 14 years old when I heard that a tournament of chess will be held in my city. That was a long awaited tournament, over a half year after my first appearance in chess competitions (Montenegrin national festival for the kids, where I finished in 2nd place for my category!). I remember that I couldn’t wait to see what my coach had to say about strong chess tournaments – different people, from different countries, with different titles and chess styles! For one small place like my hometown, Bijelo Polje, this was unique opportunity to see chess grandmasters, and some names that you read in chess magazines and newspapers.

It was 28th October, 2003. To a small hotel, a few dozen chess players arrived. It was just a couple of us kids, from my hometown. We watched these people walking, knowing no one. We could hear from our coach, but also from other people from my hometown saying some famous chess names, and pointing at some people. After an official technical speech, the tournament was officially opened. We kids couldn’t wait to see the table with pairings.

In chess tournaments, when you want to see who you’re playing against at the bulletin board, it is very hard to avoid the crowd. That was the case at this tournament– we couldn’t even come close because of the crowd, but also because we were too little to even see what was written there. After some time, when the crowd dissipated, couple of us kids came closer. One of them read aloud: ‘’Aha, you’re playing against this one, you against this one…’’, and so on. I came closer as well, and I saw that I’m playing against the player with 2282 rating points! I stayed little bit longer watching that pairing. It was so unusual for me to see something like this! At the same time, one of the kids who were reading the pairings said to me: ‘’What are you looking at? Maybe you’re going to win the game?’’, and he started to laugh. Even beyond my expectation, more stubborn than realistic, I replied: ‘’You never know.’’ My playmate was shocked: ‘’Are you serious? He has 2282 rating points! He will destroy you. You even have Black pieces! You can easily write ‘’1-0’’ for him.’’ ‘’We will see’’, I replied. I remember that moment very well. That was my inspiration… My playmate just walked away from that conversation, convinced I was talking nonsense.

The game was about to start. My opponent held out his hand, and I did the same thing. I was little bit nervous, while he looked so confident. How to fight against this player?

First critical moment of the game. I remember that I started to think here. Did I make something wrong? I knew that 3. …d6 was correct move, but still, I didn’t expect this. After some time, I realized that the knight has to be taken (because of the fork). Game continued with 4. …Kxf7 5.d4 Qe8 6.Nc3 Nxe4?

Giving a new chance to my opponent. If I played 21. …hxg6 White would have nothing!

I was not afraid to enter into the opposition! White could push g5, but after that winning chances are zero!

It seemed that Black doesn’t have good chances to stop White’s idea of walking on into the king-side. However, it’s easy to see that White doesn’t have anything after 42.hxg5? because of 42. …Kg8! Black king would be untouchable (because there wouldn’t be a White piece which could attack this light square on g8)! Also, on 42.Kh6 I prepared 42. …a3! and I would be much faster (43.Kh7 g5!!). It’s obvious that White cannot create some kind of breakthrough, even though he entered more with his pieces!

Black stops the last White’s hope. The rest is easy:

This is the final position of the game. White lost 4 pawns, hoping that he will penetrate on the king-side, but I was able to stop that idea. I will never forget that moment when my opponent said: ‘’I resign.’’ I couldn’t believe! That was one of the moments in life, when you know that you achieved a new level into something. Even more, this was the first slow game in a tournament in my life.I remember that a lot of players and people from my city came to shake hands, and to hug me with nice words. I was still in shock. I was just a 14-year old kid, playing his first slow chess game at a tournament ever.   Next 3 years I didn’t/couldn’t achieve any similar success!

In one moment, my playmate came. He said: ‘’Congratulations.’’ I said: ‘’Didn’t I tell you that anything is possible?’’ He couldn’t reply any longer. He left the conversation and place as well.
Anytime I play badly in tournaments, championships or leagues, I remember this game, and I know everything can be different. Everything can be changed… But things like this happen only if you’re brave enough. Only if you truly believe… 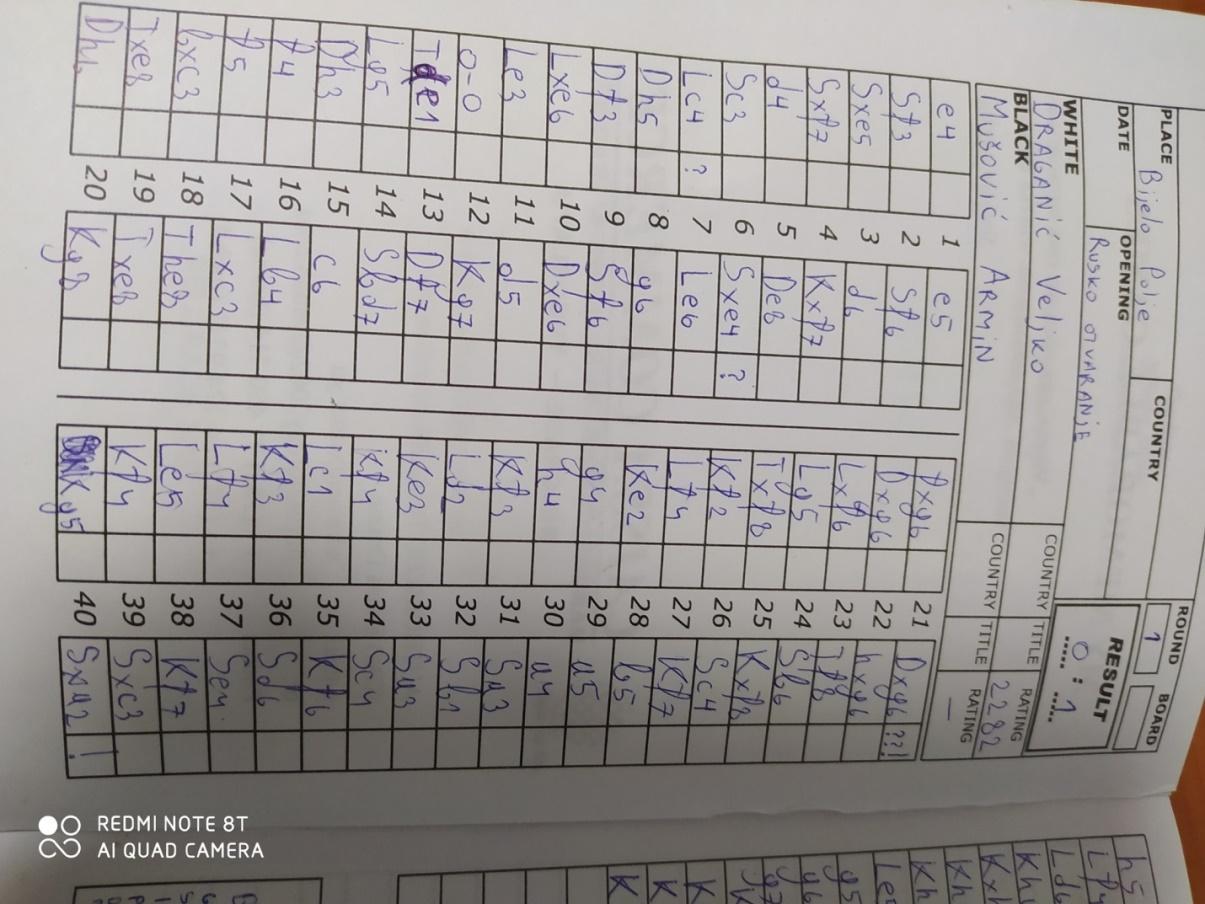